The 2017 Four Seasons Maldives Surfing Champions Trophy has finally kicked off at Sultans point in clean 2 – 4 foot waves. Day one saw the completion of the Single Fin division, which was taken out by Californian style guru Rob Machado.

Machado came up against fellow goofy-foot C.J. Hobgood in the final and the two went toe-to-toe, duelling it out on their backhand. Hobgood was in solid form posting a 15.33 (out of a possible 20) heat total but it was Machado’s fluid style and experience on his single-fin that saw him take victory with a two-wave combination of 15.67. 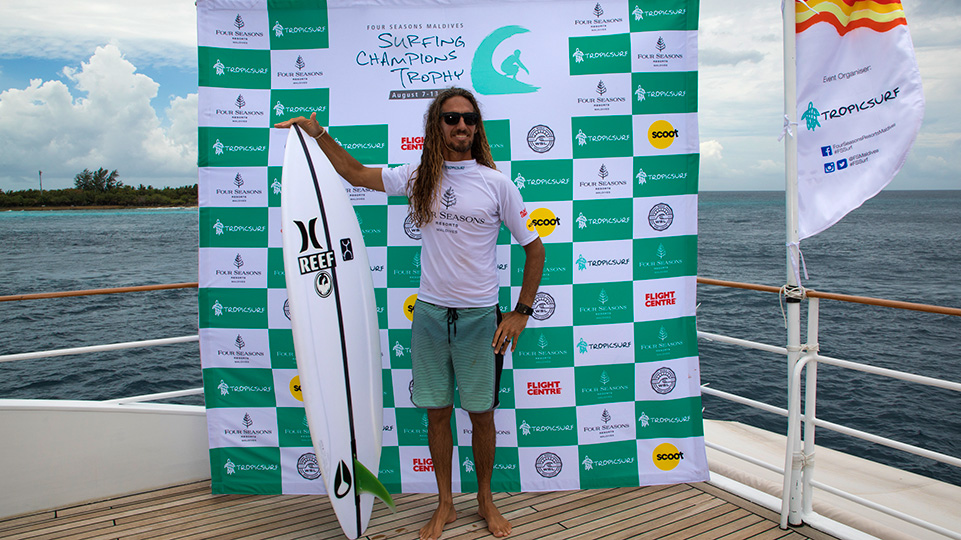 “That was so fun out there,” Machado said. “I was stoked to share the final with another goofy-footer, it was actually pretty unbelievable that it ended up like that. It’s amazing to be back here at the Four Seasons Kuda Huraa, such a magical place with amazing waves, we are all so spoiled to be here. The waves today were the best they have been all week, which was great, particularly in the Final. C.J. and I were catching waves non-stop which is what you want, lots of waves and high scores.”

Machado is at the Four Seasons Maldives Surfing Champions Trophy for his second time and had unfinished business having finished runner-up in the single fin last time to Taj Burrow. Machado got one back eliminating Burrow in the Semifinal on a board he shaped himself.

“I had last years final in my head,” Machado continued. “I was definitely keen to go one better so I was stoked to take the win.  I shaped a new board for this event, which was easy as I knew what kind of wave we’d be surfing. It’s always fun to go into the shaping bay and imagine how you’ll be surfing a wave when you build a board. It went well and I hope my twin fin does as good a job tomorrow.” 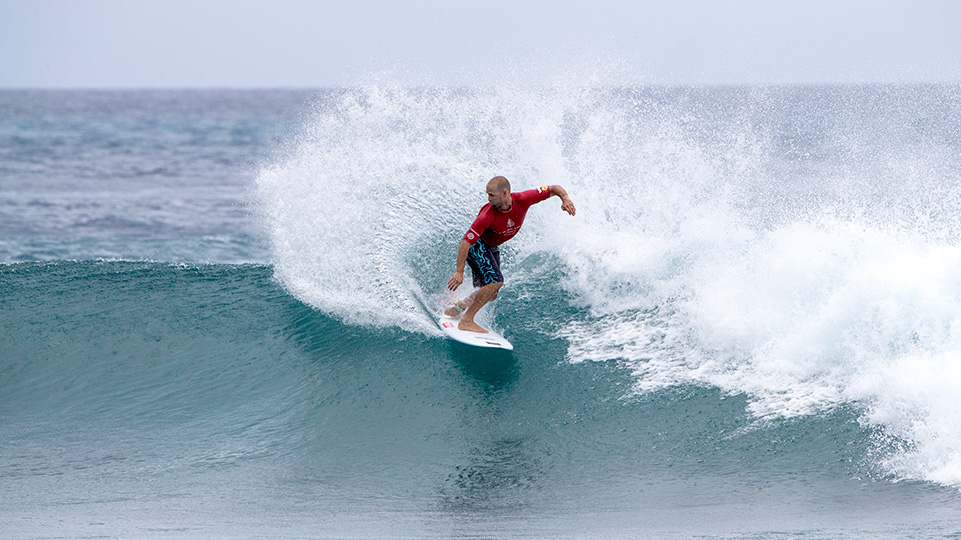 Hobgood put on a great performance all day but came just short of finding the score he needed. Half way through the final he pulled into a rare barrel but was unable to find the exit, leaving him chasing a 7.68 (out of a possible 10). In the end, he was unable to find it but was happy to share the line-up with one of his favourite surfers and good friend. After a few days of waiting, competitors were buzzing with excitement on board the Four Seasons Explorer, ‘the ultimate surf vessel’ and none were more pumped than Hobgood.

“I knew I needed to do something good and thought that barrel would open up for me,” Hobgood said. “If I just went for turns instead of the tube it might have been the difference.  Regardless of the result I’m having a great time and am just stoked to be here in paradise. I didn’t even think an experience like this was real; it’s just so amazing. Being here with all of these guys that you look up to is unreal.”

Last years single fin winner and overall event champion Taj Burrow was looking dangerous early posting the highest heat total of the day, a 16.77. He was unable to repeat this performance in the semi-final, going down to eventual winner Machado. 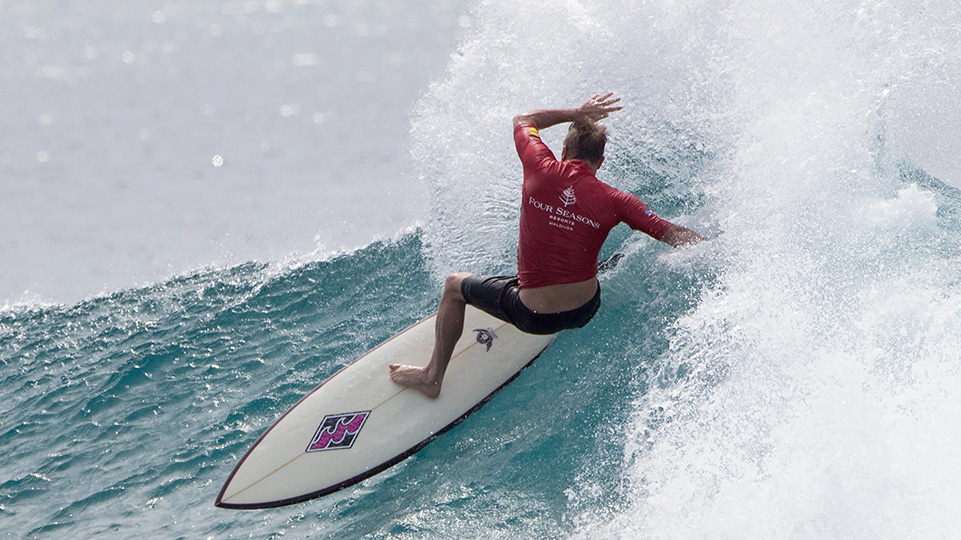 “It was a little slow out there and I fell on two good ones which is not what you want in a slow heat,” Burrow said. “I was feeling really good and my board was going well but I just slipped when I shouldn’t have. The board I have is from Jake Patterson (former CT competitor) and it goes really well. It needs a bit of power in the waves to really get going so I had to wait for the set waves. It’s good to finally get the competition started and score some fun waves. I’m pumped to be back at the Four Seasons Maldives Surfing Champions Trophy, I love this event.” 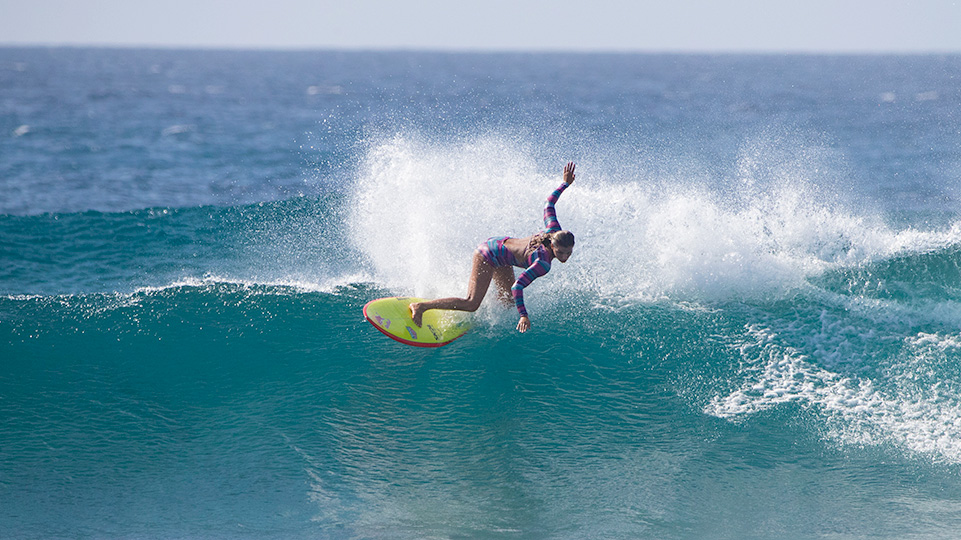 Brazilian big wave charger Maya Gabeira is used to being the lone female in the line-up and showed it doesn’t phase her too much as she took on Taj Burrow and Ross Williams. Riding a single fin for the first time this week, Gabeira enjoyed soaking up the experience of scoring Maldivian waves with two other out.

“This doesn’t feel like a competition at all,” Gabeira said. “Just surfing out there with no one out except some of the world’s best is so fun. Watching these guys surf is really inspiring to me and amazing to watch. I’m slowly getting used to the single fin but it is really different for me. Today was probably the best waves I ‘ve had here in the Maldives, which was cool. This is just such a crazy experience; I have never been on such a luxurious surf trip, it has exceeded all of my expectations.”

Tune in tomorrow as the 2017 Four Seasons Maldives Surfing Champions Trophy continues with competitors taking to the water on twin fins in what is bound to be another action packed day at the ‘world’s most luxurious surfing event.’