Burrow Finds Redemption With a Twin Fin Win in The Maldives 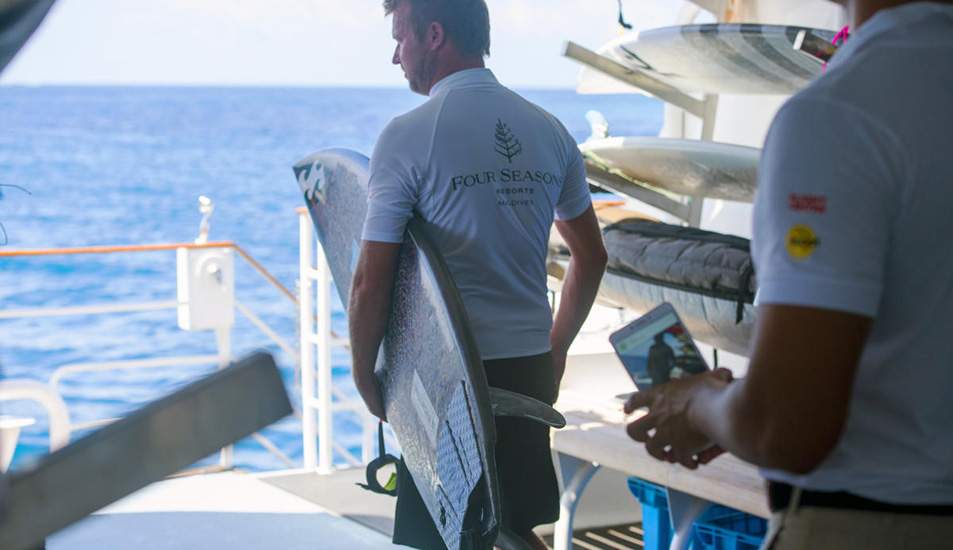 Taj Burrow on his way out on his trusty DHD shaped twin fin at the FSMSCT. TOM BENNETT

Taj Burrow has taken out the twin fin division on Day two of the Four Seasons Maldives Surfing Champions Trophy. Burrow was unstoppable in the pumping 3 - 5 foot clean waves on offer at Sultans as he moves closer to a spot in the overall final.

In the final, Burrow came up against form surfer Rob MachadoRob Machado in a thrilling match-up. After Machado knocked Burrow out in the semifinal of the single fin, Burrow had something to prove and was hungry for redemption. His early round loss in the same division last year looked like a distant memory as Burrow ripped his way to a winning two-wave combination of 16.67.

Burrow finding some shade during his super heat with Ross Wiliams. TOM BENNETT

"I was so excited to get the competition started today after a bit of a shocker yesterday," Burrow said. "I couldn't believe how good the waves were today, I definitely wasn't expecting it to be that good, we were pretty spoiled. Everyone was so fired up today, my heat with Ross was so sick, just a real see-saw then the final with Rob was just all time, I'm so worn out now.

Burrow had his worst result in the twin fin division at the 2016 Four Seasons Maldives Surfing Champions Trophy and was keen to turn it around. Opting to surf on the same board he did last year, Burrow found a rhythm and possibly a new favourite weapon. 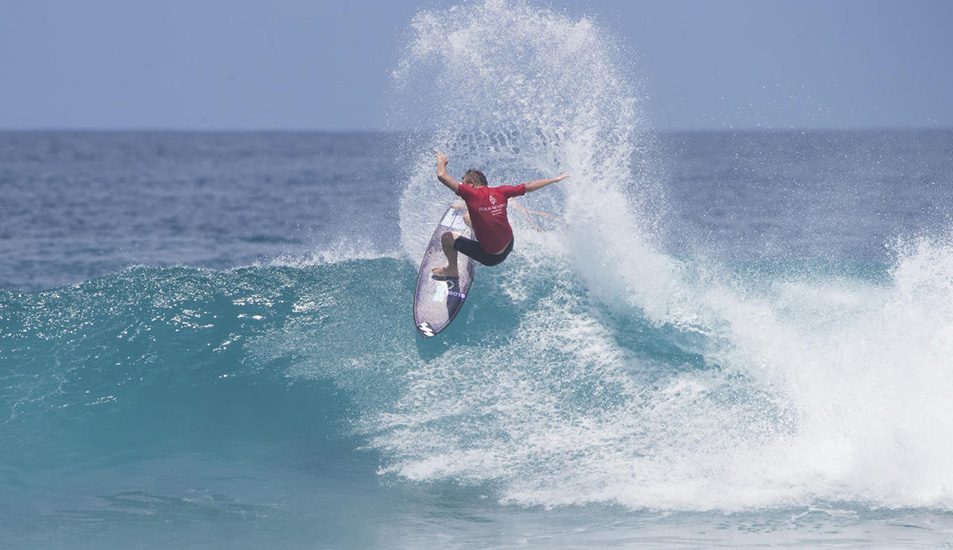 Taj claimed he felt more comfortable on his twin fin than any other board and with turns like this, it's easy to see why. SEAN SCOTT

"Surfing in a final with Rob on a ‘twinnie' is a pretty tough task. He is so good on these different boards and is surfing so well right now, it's like he is still a teenager, it was super intense and I'm stoked to get one back on him. I haven't surfed this board since last year but I knew if I got a good one on it, it'd go well I loved it. It's just so sick to be back here, the level of luxury is amazing. Rebecca and I are thinking of extending our stay at the Four Seasons Kuda Huraa, it's just too good."

Machado was the surfer to beat in the twin fin with a solid display of surfing all day. On a board he shaped himself, he posted a heat total of 14.80 in the final but it wasn't enough to overcome a rampaging Burrow. With this being his second final of the event, he still leads the charge to the overall final of the event. 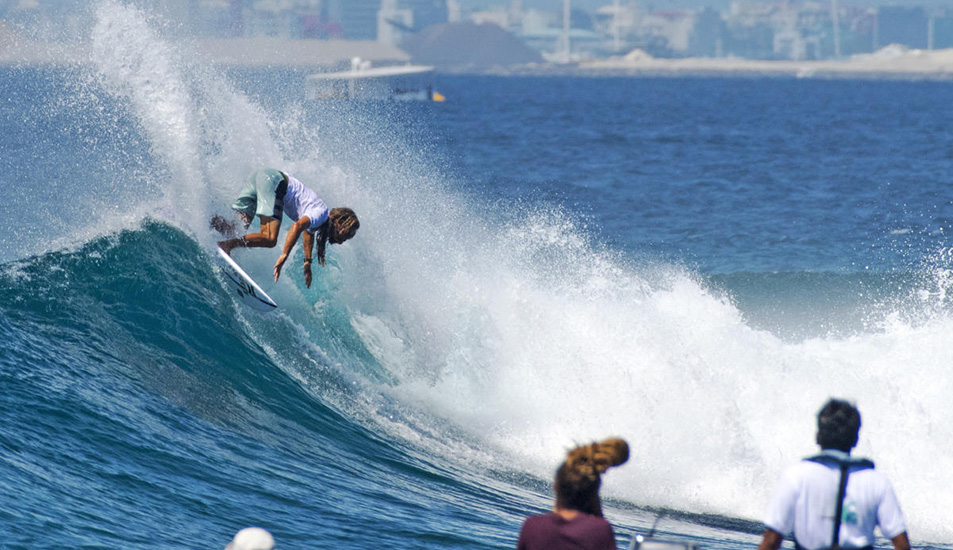 Rob Machado's smooth style had a touch of aggressiveness on day two of competition in the Maldives, perfectly displayed here. TOM BENNETT

"When we pulled up this morning we were freaking out," Machado said. "The waves were so good today, everyone was stoked. After surfing here last year I had a good idea of the twin fin I wanted to shape and I loved how it went, this wave offers a lot of different sections so you need a versatile board. The competition today was so exciting, the semi with Taj and Ross was crazy and it got me so pumped to surf. The waves were non-stop all day; it was amazing and a real pleasant surprise."

Local Maldivian wildcard Ismail Miglal put on an impressive display in his opening round heat to overcome 2001 WSL Champion C.J. Hobgood. Miglal was electric on his twin fin even throwing a few aerial manoeuvres to move into the semifinal. In the end, he was eliminated by Rob Machado but was stoked to make a heat against some of his heroes.

"Making a heat at this event is like a dream for me," Miglal said. "I never thought it would happen but somehow I was able to find a long one at the end. It is really surreal surfing against my heroes and to beat a world champion is amazing, I got really lucky. We are all so stoked the waves turned on today, it was pumping out there. I'm so honoured to represent the Maldives in this special event. I can't wait to surf tomorrow on the thrusters."

In what was undoubtedly the heat of the event so far, eventual division winner Burrow came up against Hawaiian Ross Williams. Williams looked tack sharp on his fresh twin fin laying it on rail and gouging huge hacks posting a heat total of 17.36. Burrow found himself on the ropes needing an 8.70. With only minutes to go, Burrow found a perfect set wave and got to work. The 19 year, CT veteran put on an incredible display of his trade mark whipping turns to post an excellent score to win the heat with a total of 18.10. 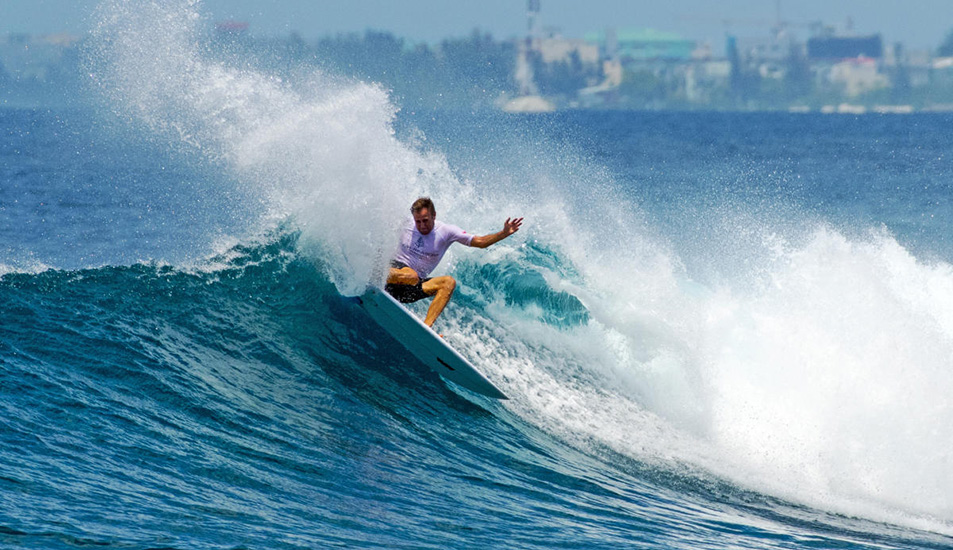 Ross Williams pushed eventual winner Taj Burrow right to the end of the semi with his trademark combination of style and power. TOM BENNETT

"I was more nervous at the beginning of the heat than the end," Williams said. "The fact that I had a lead in that heat at all was cool as Taj is ripping so hard. I've only surfed that twin fin a couple of times so it was nice to feel it out. You really have to surf with your rail on a twin fin otherwise you just slide out, so it's a major learning curve, something that makes this event super cool. It was a really good battle that heat, and that's what you want. I'm having such an amazing time here in the Maldives, this place is incredible and the waves are sick." 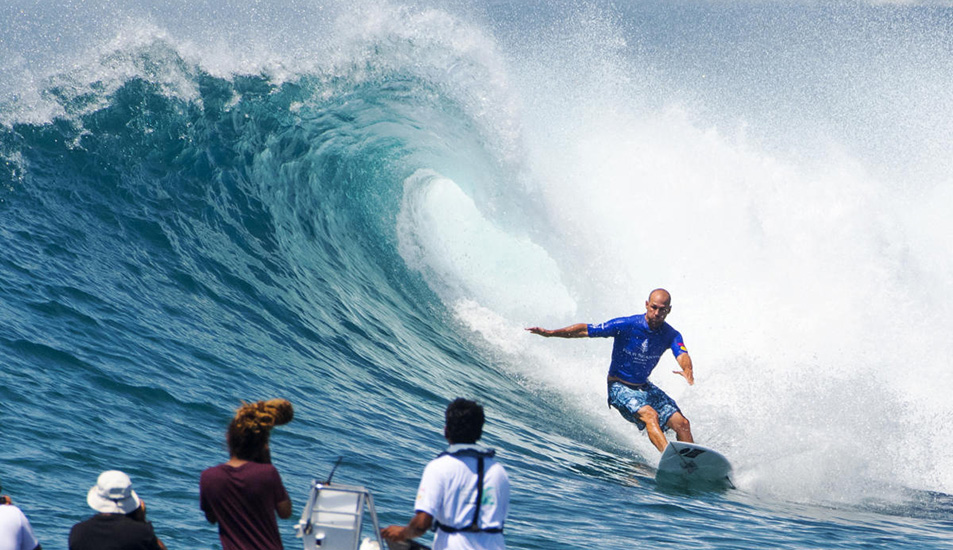