Now in its fourth year this, boutique invitation-only competition, coined the “most luxurious surf contest in the world”, is the hottest surf and spectator ticket around. Hosted in conjunction with luxury surf pioneers Tropicsurf aboard the Maldives ultimate surf vessel, Four Seasons Explorer, the unique event sees six surfing icons ride it out on single-fin, twin-fin and triple-fin thrusters to win kudos and a US$25,000 purse.

Kuda Huraa will be giving a huge Bodu Beru ‘big drum’ roll welcome to David ‘Rasta’ Rastovich. Hitting the ocean scene as a nipper (young Australian lifesaver), Rasta went on to surf up a wave of early wins including U/16 World Grommet Titles in Bali, Pro Junior Burleigh Heads and finals of Billabong World Junior Championships. Turning his back on the traditional pro route, he went on to carve a career that has included recognition as the world’s first pro ‘freesurfer’; winning the open class Molokai to Oahu Hawaiian inter-island paddle race (the world champs of long-distance open ocean paddling); and setting up ‘Surfers for Cetaceans’, dedicated to the conservation and protection of the marine life he shares the water with.

Rasta can ride just about anything – from traditional thrusters and quads to twinners, alaisa and olos. His wave skills on equipment of all shapes and sizes, coupled with his environmental activism, make him perfectly suited to both the contest and culture at Kuda Huraa. He’ll be travelling to the island with his surfer fiancé and equally impassioned environmentalist, Lauren Lindsey Hill. 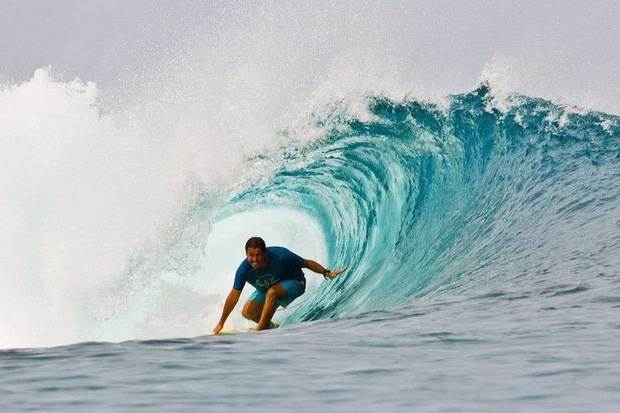 The second challenger to TK’s crown is the vanguard of Brazilian surfing: the easygoing yet deadly efficient Fabio Gouveia. Fabio began surfing at 13 and five years later became the first Brazilian, pro or amateur, to win a world title when he took the 1988 trophy at the World Amateur Championship. The ‘regular footer’ turned pro and refined his closed-knee style, able to sinuously line over flat spots when others would hop and bounce – a technique often compared to surf icon Tom Curren. An amateur boardmaker since 14, making some of his own equipment during his pro years, he embarked on a shaping career in the late 2000s. His knowledge of boards might just give him the edge given the three-division and retro-style nature of the competition!

Fabio’s invitation to participate is, quite literally, a dream come true. “I heard about the event last year during a surfing boat trip and thought at the time it would be a dream to be invited one day, “ he explains.“And here I am in the line-up for 2014 against legends like Taylor Knox and Rasta! I am so happy just to be going and am already busy hand-crafting my own single, twin and thruster fins.” 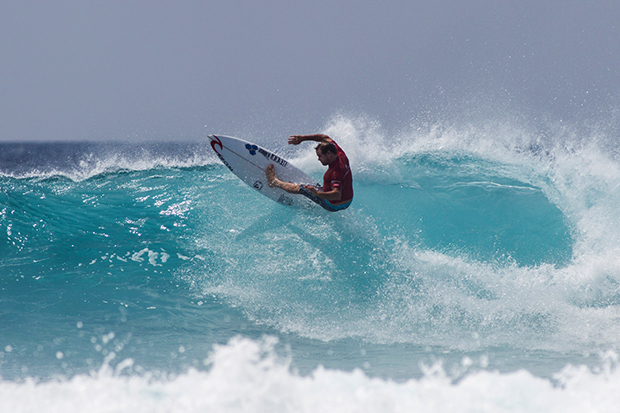 Taylor Knox - back to defend his title.

Commenting on the two latest signings, Event Co-ordinator Mark Winson of Tropicsurf said: “It’s a real coup to have lured Rasta into a competition format. As a pro freesurfer, eco-warrior and all-round soul surfer, it’s as if this contest has been custom designed for him. And then add the father of Brazilian surfing, Fabio, with his expertly blended turns – there’s going to be some pretty awesome surf viewing up for grabs.”

If the first three surfers are anything to go by, don’t wait for the announcement of the next three to get booking! Avoid disappointment and reserve a spot at Four Seasons Resort Maldives at Kuda Huraa’s private coral island paradise for the duration of the event; and for the chance to rub shoulders with all the competitors and judges.

Guests of Four Seasons Resort Kuda Huraa can catch all the action with day passes aboard Four Seasons Explorer or book the all-inclusive Group Surf & Stay (available from August 4 to 11 for a minimum booking of four rooms for five or seven nights). In addition to competition day passes, full board and transfers, Group Surf & Stay includes five or seven days of intense surfing with Tropicsurf’s expert guides, plus the chance to rub shoulders with all the Surfing Champions contestants in Kuda Huraa’s award-winning surrounds.

Limited day passes will be available (at a fee) for non-package guests/members of the public to view the event from Four Seasons Explorer. Call + 960 66 00 888 or email reservations.mal@fourseasons.com for enquiries and rates.