Ultimately the all-important inside connection proved key for big scores and heat wins in the strong offshore conditions. Something Knox and Curren had wired from the outset today, as they laid down timeless rail-to-rail surfing with smooth transitions between high-powered maneuvers as the competitive savvy between the master and protégé was on display.

“That was an emotional contest for me because I was surfing with all my hero’s,” said Knox. “It was just really cool today, everyone I came up against was just surfing so well.”

The first half of the final was a seesawing affair before Knox locked in a heat-high 8.03 score midway, to take the lead and never be headed. As the tide filled in conditions became inconsistent, leaving three-time world champion Curren requiring an 8.17 score on the siren.

“I was really nervous at the end thinking the Tom Curren magic was going to strike me down but the ocean actually cooperated with me,” said Knox. 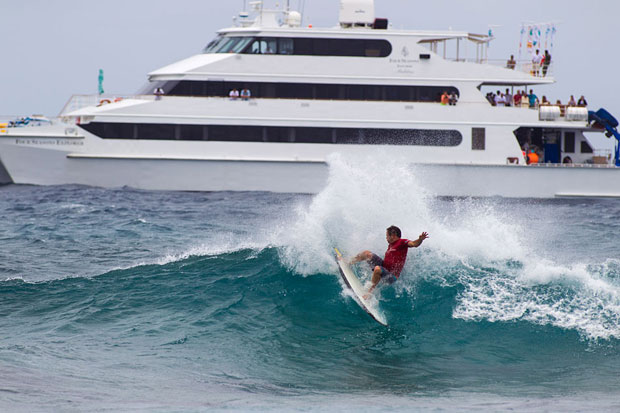 Last year the Californian retired from ASP World Tour after 22 years of circling the globe as one of the worlds most respected surfers and headed into the Maldives in vacation mode before getting swept up by his highly competitive rivals.

“The guys are a little bit more into it than what I expected. I thought it was going to be a groovy, little fun event but they care. They really care,” laughed Knox.

“They woke me up after the first division, I went ‘Oh this is serious here’. But at the end of the day you get to go back to the Four Seasons and live in the lap of luxury so you really can’t get mad at any point,” he added.

Curren’s earlier win in the Single Fin division along with today’s runner-up result all but guarantee’s him a berth in tomorrow’s Grand Champions Final. 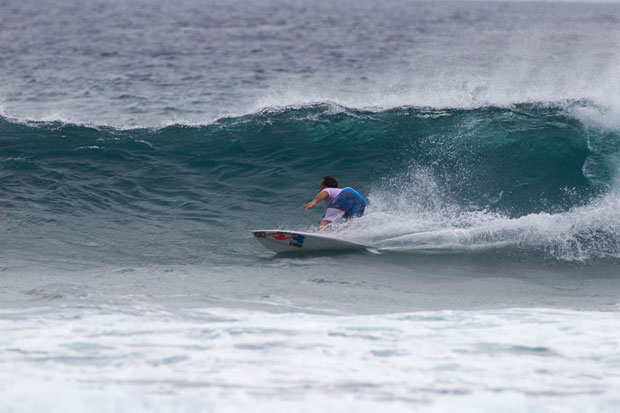 “I thought I had a pretty good chance, but I made a couple of mistakes. I fell on my first wave and could have made more of the final section on my last wave because no more sets came after that one.

“I am super happy to have been in the final and I’m going to get my board waxed up for tomorrow and hope for the best,” he added.

Curren was competing on an old board of Dane Reynolds that was originally built as a twinzer (two big main fins and two smaller fins), but the craftsmen at the Channel Islands factory knocked the fins out and rebuilt it as a standard twin-fin. In the warm-up session Curren looked downright deadly -- flowing, flying, connecting sections and blasting big turns. 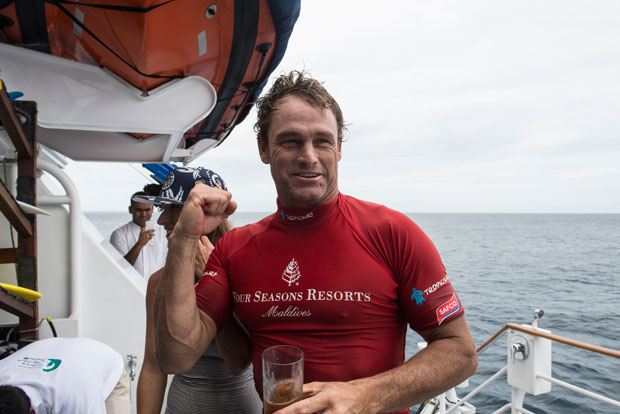 However today belonged to an inform Knox, who will be hoping to secure what is sure to be the hotly contested, second berth in the Grand Champions Final tomorrow. The three fin Thruster Division will prove the decider and kick start the last day of the 2013 Four Seasons Resorts Maldives Surfing Champions Trophy.

The event format showcases the evolution of the surfboard with the old school ‘70s single-fin in Round 1, Round 2 celebrates the brilliance of the twin-fin that dominated in the early ‘80s, and coming up in Round 3 we’ll see the state-of-the-art three-fin thrusters put to use. The two surfers with most accrued points at the end of the three rounds qualify for the Grand Champions Final.

Lone female star Beachley suffered an opening round loss and was literally blown off her first wave due to the strong offshore winds, while fellow Australian Hardman and Carroll advanced through the three-person heat.

“They were really challenging conditions out there,” said Beachley. “I’m disappointed, but I’m building a house, at least I caught a wave this time.”

“Never underestimate the competitive spirit of these guys, they don’t want to lose, especially to a girl. It doesn’t matter how many world titles you have.”

Tournament young gun Pedro Henrique, 31, (BRZ/PRT) also bowed out in the opening round, out surfed by Knox and Curren in one of the events most explosive heats.

Tomorrow the contest will end with the thruster division and the grand champions final.