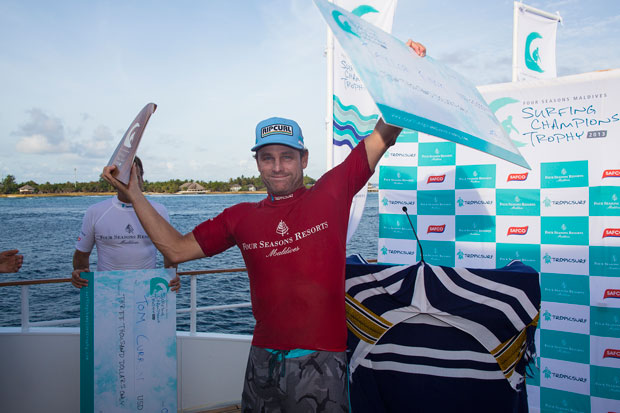 After an amazing week of competition from the six world surfing champions, it all came down to final thirty seconds, with Knox locking in a late 9.17 score to claim victory in the pristine 1.5 metre (4-5ft) reef break waves of Sultans Point. 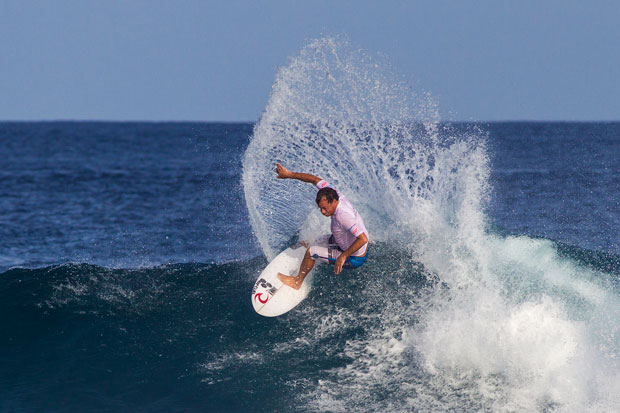 The hotly contested final, saw four excellent rides posted by the two Californians.  Knox opened strongly for an early lead with a 9.27. Curren answered back at the half way mark with a heat high 9.43 to be looking down the barrel at victory.

But patience paid off for Knox, who required a 9-point ride and used his priority wisely to pick off a 9.17 in the final minute to claim the win. Knox finished with a heat total of 18.40 to Curren’s 18.33 (out of a possible 20).

“I got a couple at the start and was thinking I’m in a good position here, but as I’m paddling back out, there’s Tom sitting in the barrel,” said Knox.

“I had to use my priority because I knew he had taken the lead. I held myself back and waited it out for that set wave right at the end.”

Knox, who retired as the oldest and one of the most respected surfers on the ASP world tour last year, at age 41, said he achieved today what he had failed to do at the elite level.

“I could never do it on the world tour, I had to come to the Maldives and learn off these guys and as Kelly Slater said ‘I’m one of the best surfers but not a good competitor’ but that's changing now,” he added.

A super cool Curren remained unfazed under pressure, despite his opponent’s seem ably insurmountable early lead the mythical surfer/musician found the events only barrel in the final to bounce back.  However it wasn’t enough to halt Knox in his inaugural Maldivian campaign and Curren finished runner-up for the second consecutive year.

“I’m really stoked to have made the final,“ said Curren. “The waves came today and the weather was nice but I had a bad start to the heat. I was able to come back with a good score and at least the final was a close finish so I can’t complain.”

“Taylor was in-form today and yesterday as well. He has been surfing strong and with a lot of power. In these condition especially he is really hard to beat,” added Curren.

Knox qualified for the Grand Final by winning both Saturday’s twin-fin and the thruster division today. Curren secured his finals berth with a win in the single-fin and a runner-up placing in the twin-fin division.

After an unusually stormy week in the Maldives, Sultan’s Point turned on for the final day with light offshore winds, sunny skies and steady surf pumping down the reef. The day kicked off with the Thruster Division. With state-of-the-art, contemporary three-fin boards being utilized the action was fast and full-on as the distinguished field of surfers relished being back on their more conventional, up-to-date equipment.

But nobody took more advantage of the thruster than Knox, who carved his way to victory in the Thruster Final with extremely committed power surfing to defeat former two-time world champion Hardman (Aus) 19:00 to 14.37 (out of a possible 20).

“We got lucky with the waves, I knew it was going to turn on and it did,” said Knox.

“It was a win-win for both of us, that set had two really good waves,” said Knox.
“I would have taken the first one if Damien hadn’t, but the second one was amazing and it held up into the lagoon and I was able to smash it all the way.”

Hardman acknowledged that the Knox’s performance raised the bar of the entire contest.

“It was good to make the final, but I ran out of puff in the end up against Taylor,” said Hardman. “He was surfing probably the best has been all event and its pretty hard to raise the bar when someone is getting nines and tens but I did my best but got beaten by a better man on the day.”

Hardman who is still involved at the elite level of surfing in his role as Contest Director for Rip Curl said that the competitive element is always a factor.

“It’s weird, on the surface it’s not that serious, but there is an undercurrent that it is serious,” said Hardman. “You feel like you are always looking over your shoulder and everyone has their guard up. We aren’t hassling each other like we used to do back in the ‘90s but everyone definitely wants to win.”

Hardman and Curren battled it out in a back and forth semifinal until the tenacious Australian goofy-footer locked in a 6.5 ride in the waning seconds of the heat. Curren was left needing a seven-point point ride, but as the ocean went flat he never had the opportunity to answer back.

“It was a tight one, Tom’s one of the best competitors in the in the history of the sport,” said Hardman. “I’m stoked to be able to hang on and come away with a win.”

On the other side of the draw, in the second semifinal Knox racked up a 9.07 wave score to edge out an energetic Henrique to join Hardman in the thruster final berth and secure an all-important Grand Final Champions berth.

Seven-time world champion and lone female competitor, Beachley, narrowly missed out on a semi-final berth, defeated by Hardman on the buzzer in their round one heat.

Two-time world champion Carroll (Aus) also looked set for a semifinal berth until the last 30 seconds of his opening heat when Henrique snatched second place from the celebrated storm surfer.

With the Four Seasons’ luxury catamaran, The Explorer, serving as the floating headquarters, surfers and spectators alike enjoyed the action, cold drinks and great food from the deck.

The event format showcases the evolution of the surfboard with the old school ‘70s single-fin in Round 1, Round 2 celebrates the brilliance of the twin-fin that dominated in the early ‘80s, and coming up in Round 3 we’ll see the state-of-the-art three-fin thrusters put to use. The two surfers with most accrued points at the end of the three rounds qualify for the Grand Champions Final. 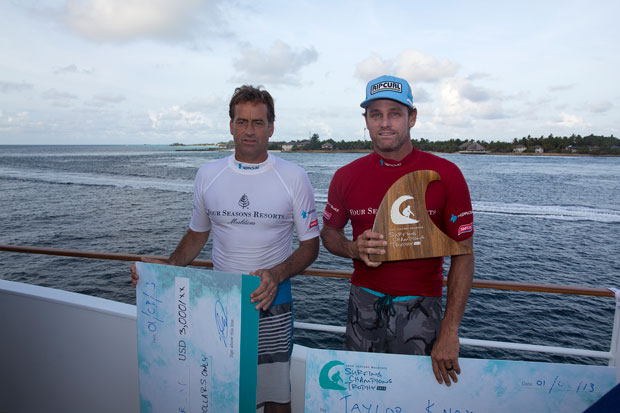