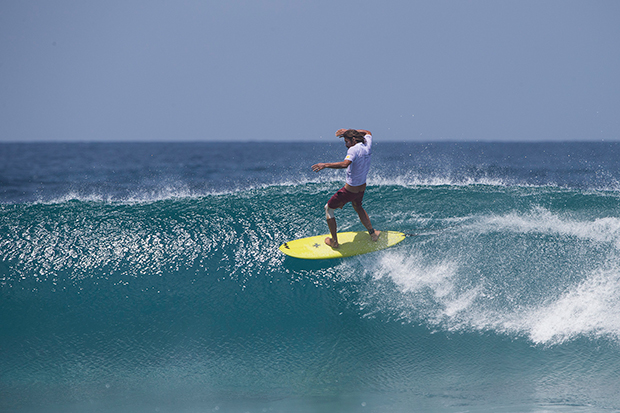 “This whole event is just about fun,” Rastovich said. “Watching all of the guys surfing so beautifully is a real treat. To have some diversity in a contest is amazing, we’re not all the same age, we don’t all have the same style so it’s nice to see people surfing in a different kind of way on different kinds of boards. It’s really great.”

Rastovich surfed the same single-fin he rode at last year’s contest, a board shaped by his good friend and Australian surf legend Joel Fitzgerald.

“It’s a fun board, I don’t actually ride single-fins that much so it’s kind of a new challenge to try and ride one as they can be pretty tricky. I’m looking forward to the twin-fin as I pretty much ride them exclusively so that will be really fun. It’s neat to see each other surf on boards we don’t usually surf, it’s a really cool format.”

Padaratz was unlucky to just miss out on the heat win but was without a doubt one of the form surfers of the day, having the highest average heat total.

“The final was amazing,” said Padaratz. “We had a whole bunch of waves come through. I saw Rasta get barrelled then do some massive turns and knew it would be tough; he is such an amazing surfer. I’m so stoked just to be out there with these amazing legends in these perfect waves with all the great people at the Four Seasons; I feel blessed.”

Rastovich made it through to the final after overcoming current WSL Longboard world champion Harley Ingleby. Both competitors were made to stay patient as almost fifteen minutes passed without a set on offer.  Rastovich, after moving to the inside was able to post two mid range scores to take the heat win. Ingleby was unlucky not to find a back up score in what was a slow heat for waves.

“It’s always a bummer when you don’t get to surf waves in a heat,” Ingleby said. “But man I got to surf against three of my idols growing up, and the location here, you couldn’t really ask for too much more.”

Padaratz found his place in the final after overcoming big wave legend Shane Dorian (HAW) in what was considered the heat of the day. Dorian was gaining momentum on his single-fin but found himself in a combination situation after Padaratz posted two excellent scores for a heat total of 18.50 with a pair of incredible barrel rides.

Earlier in the day, Four Seasons Maldives Surfing Champions Trophy debutants, Sofía Mulánovich (PER) and Brad ‘Ger’ Gerlach (USA) were unable to make it through their respective heats but were not too concerned about the results.

“I’m not disappointed at all,” Mulánovich said. “Its so amazing to have the opportunity to surf this wave with Dave Rastovich and Neco Padaratz.  I mean I feel like a winner before touching the water. I’m really happy to share waves with them in paradise at this amazing contest, I’m really happy.”

Competition looks to be resuming tomorrow when competitors pull out the twin-fin in what is sure to be another exciting day of competition. For more information, check back at surfingchampionstrophy.com and worldsurfleague.com.